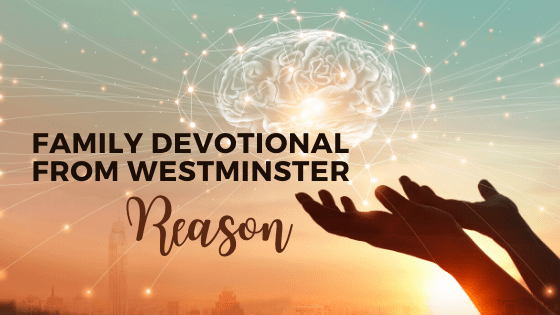 Since we have decided to cancel public gathering for worship amidst the current COVID-19 epidemic and are only holding them via live stream, we are also providing weekly family devotional resources. For the week of June 21st it’s called Reason.

This family devotional is a bit different than the rest and will have a different format. It’s all about thinking through the reason for your faith in God.

It’s connected to the area of “apologetics,” which is about having a reasonable understanding of your faith, and being able to give a reasoned defense of your faith.

How it works and why it matters

Parents or caregivers should first read this through. This will take some effort, so be sure to set aside some time to go through this first.

Proactively engaging your children on matters of faith is one of the most important things you will ever do. (See the Bible verse from 1 Peter 3:15 below.) As you read through the three pages of this devotional resource, you will need to evaluate which part of it is best suited to engage the people in your household based on their ages and personalities.

The reason for your faith

In 1 Peter 3:15, the apostle Peter writes this: “But in your hearts revere Christ as Lord. Always be prepared to give an answer to everyone who asks you to give the reason for the hope that you have. But do this with gentleness and respect…”

In light of this, Christians are encouraged to think through the reason for their hope. This needs to start at a young age and is vital in a world which is increasingly apathetic or hostile to their faith. It starts young, and is sustained as a way of thinking through elementary and high school, and into young adulthood. This devotional will hopefully help equip you, and get you thinking and moving in a proactive direction.

Our faith is often the result of many factors. Here are three well-known reasons for our faith. Each reason includes a few points (hopefully communicated in an accessible way), a relevant Bible reference, and also an activity that could be used to strengthen the idea in your minds.

Why not read them through, think about the people and personalities in your own household, and have a discussion about the reasons we believe in God?

It should also be noted that there are many other reasons not included on this list. Some people believe in God because Jesus’ example of radical love has inspired them. Others believe because they find great comfort in the fact that God has done so much to forgive them for their sins. Some people have personally heard from God, experienced a miracle, or feel his presence very strongly. Others believe because the evidence for the resurrection is undeniable. If you can think of an activity to help show the power of these other reasons, send them in to us and we’ll share them too!

Reason #1: Our world had to come from somewhere

• In science class we’re taught about cause-and-effect. What that means is that if something happens, someone else had to cause it to happen. For example, if you hear a knock on the door, then something or someone had to do something to make a knocking sound. So if our world is here, something (or Someone), had to put it here.
• Since the physical “stuff” in our world (like physical matter) can’t create itself, it needed to be created by something non-physical. And since the act of creating something involves thinking, that non-physical thing must be a being with a mind: God!
• Bible insight from Genesis 1:1-3 NIV: “In the beginning God created the heavens and the earth. Now the earth was formless and empty, darkness was over the surface of the deep, and the Spirit of God was hovering over the waters. And God said, “Let there be light,” and there was light.” There is a lot happening in these first three verses from the Bible. They describe how God created the world out of nothing.
• Possible activity: Go around your house (or outside) demonstrating the principle of cause and effect. This could include knocking on a door and hearing the sound, shooting a ball and seeing it go into a net, grabbing a leaf from a tree and watching it fall to the ground. Can we think of any effects that don’t have a cause?

Reason #2: The design of our world is so amazing that there must have been a Designer

• Think about this: There is enough intelligent, complex information in one amoeba to fill thirty encyclopaedias. (An amoeba is a tiny one-celled organism.)
• The chance of our universe coming into existence simply by “accident” is one in ten to the power of 138. Wow! Write out a number starting with 1 and then with 138 zeros behind it!
• Or, our universe coming into existence by chance would be like a hurricane picking up every last piece of garbage in a huge garbage dump, swirling the bits together in the air, perfectly assembling a Boeing 747 plane, and setting it down, ready to fly.
• Or it would be like taking a bow and arrow, aiming at a coin and trying to hit it—except the coin you’re trying to hit isn’t in the next room; it’s on the other side of the observable universe, twenty billion light-years away!
• Bible insight: Psalm 19:1-2 NIV: “The heavens declare the glory of God; the skies proclaim the work of his hands. Day after day they pour forth speech; night after night they display knowledge.” In this psalm, David talks about how God’s creation—including the heavens and skies—“declare the glory of God.”
• Possible activity: If you have a slingshot (or bow and arrow), or even the ability to throw a stone at a faraway target, test your ability to hit a target a long distance away. (Please be safe!) Talk about the likelihood of being able to hit a target the size of a coin on the other side of the universe twenty billion light-years away! Or, simply observe the stars one night, either at home or camping. Stretch out a blanket on the ground, grab some hot chocolate and look up! Talk about the beautiful and complex design of the universe and what that tells us about God.

Reason #3: Since people around the world have a basic sense of right and wrong, Someone must have put it there

• Nothing else can fully explain why there is ‘morality’—a basic sense of right and wrong—among different cultures and different peoples around the world. No matter where you live, no one likes it when someone else butts in line!
• Some people say that the basic right-and-wrong morality that people have is simply because it’s what most people agree on. But if it’s based on what most people agree on, would it then be okay (if everyone agreed together) that hurting random and innocent people was okay? To say that right-and-wrong is based on consensus (what most people agree to) is to say that no objective (fixed and true) standard exists.
• Others say that we inherited right-and-wrong from evolution. But evolutionary theory teaches that each species protects its own kind to survive. So according to evolutionary theory, it would be okay to randomly hurt someone from another tribe or species since it serves to protect your own. Since we sense this is not right, our morality can’t come from evolutionary theory.
• Bible insight: Romans 2:14-15 NLT: “Even Gentiles, who do not have God’s written law, show that they know his law when they instinctively obey it, even without having heard it. They demonstrate that God’s law is written in their hearts, for their own conscience and thoughts either accuse them or tell them they are doing right.” This was written by the apostle Paul in the 50’s. When he says “Gentiles,” he means non-Jews. What he’s saying is that people (like Gentiles) who are not even aware of God’s written law (commands in the Old Testament), have an internal instinct to follow it. Why? Because God put it there.
• Possible activity: Throughout your day, tell the others examples you see of fairness or right and wrong that you think would apply to everyone. Think specifically (and give examples) of things that don’t need to be taught. They could even be rules in your own house! As you think of examples, talk about them with each other and brainstorm where you think these ideas came from in the first place.