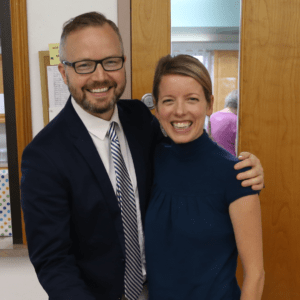 Matthew Ruttan has been the pastor at Westminster since 2008. His motto is: A pulse doesn’t mean you’re alive. What he loves most about Westminster is the sincerity of the people, the team atmosphere, and a genuine desire to grow in faith.

He’s been married to his wife Laura for 20 years, and is enjoying the sacred trust of raising three wonder-filled children.

He loves Jesus and how he makes all things new. He is a student of the Bible, writes songs, and authors The Up Daily Devotional five days a week. (You can sign-up at TheUpDevo.com.) In 2021 he also began The Pulse Podcast with Matthew Ruttan which you can find on iTunes, Google Podcasts, Spotify, Stitcher or TuneIn. In 2015 he was awarded “best blog” by the Canadian Church Press.

In 2018, “Up!” was published as a book, and also came to the Life Radio Network across central Ontario. In 2020 his second book of devotional was released called ‘Turbulence: Devotionals to steady you through the storms of life.‘ In the past few years he’s had a variety of articles published by The Toronto Star, The Gospel Coalition, Faith Today Magazine, The Presbyterian Record, and The Christian Courier. He also enjoys speaking to various groups about modern faith and spiritual growth.

He’s a Toronto Maple Leafs fan and feels that 2023 is the year!

He’s also been learning more about the modern evil called human trafficking and has been getting more involved. It’s the nightmare that isn’t a dream.

On his days off he likes to wear track pants, play road hockey, and make pancakes. Sometimes they have chocolate chips—but only when he’s feeling crazy. Oh, and one day he hopes to own a rowboat. Just because it seems awesome.

He believes that if you have a life-changing faith, your faith should be changing your life. Learn more, hear sermons and songs, and sign-up for ‘Up!’ at his online homebase: MatthewRuttan.com.

The Up Devotional has expanded to podcast format and is available on Apple Podcasts, Spotify, Stitcher and Google Podcasts.

What are his favorite

On Matthew's YouTube channel you'll find short videos he has put together introducing Sunday series' or vlogs (video blogs). You can also see other videos he has 'liked.'

Connect with Matthew on LinkedIn. There you can see professional history, blog posts, articles, and other information related to church, publications and education.

When the world hates you because of your faith

Tarrying with a Lord you cannot see

What do we really know about the historical Jesus, and how does that impact our faith?

This survey will help Pastor Ruttan decide on the next Sermon series he will teach...

It’s time to begin our search for a new Music Director. The job description will...