What do they all mean? Understanding the words you hear during Holy Week and Easter

(Warning: The content about crucifixion is for mature audiences.)

I was in an airport a few years ago and overheard people talking in a different language. I couldn’t understand a single thing they were talking about.

Then it struck me: Some religious or “churchy” words can seem like a foreign language to many people. And during Holy Week this can be amplified. 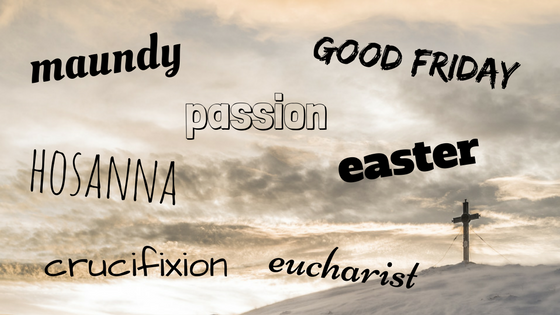 So here’s some explanation about the words you hear during Holy Week and Easter. I hope it helps you feel less like you’re lost in an airport on the other side of the world.

Holy Week
If something is “holy” that means it has been set apart from ordinary use by God to be used for something special. So Holy Week is a special week. It’s when we remember Jesus’ sacrifice on the cross and his victory through the resurrection. We remember and celebrate those things all the time of course; but there’s a strengthened emphasis during Holy Week with prayer and worship services.

French philosopher Rene Girard argues that enlightenment can only come from the cross. So during Holy Week we fix our eyes on the cross and seek that continued enlightenment.

Palm Sunday
This is the Sunday before Easter and officially starts Holy Week. People often wave palms to celebrate Jesus’ entry into Jerusalem before his death and resurrection. In John 12:13  it says: “they took branches of palm trees and went out to meet him, shouting, “Hosanna! Blessed is the one who comes in the name of the Lord– the King of Israel!”  In the first century, people waved palms during parades.

Passion
It means “suffering”; and during Holy Week (sometimes called Passion Week) it more specifically refers to the story of Jesus’ suffering in God’s plan to save and heal his people and world.

Maundy Thursday
“Maundy” (not Monday) is from the Latin phrase “mandatum novum,” meaning “new commandment.” So on Maundy Thursday we gather for services that celebrate a few things, including: (1) The “new commandment” Jesus gave to his followers to “love one another” (John 13:34); (2) the original Last Supper; and (3) when Jesus washed the disciples feet.

Eucharist
This is one of the words used for Communion or The Lord’s Supper (an act that remembers Jesus’ death and sacrifice).  Literally it means “thanksgiving” or “gratitude.”  The bread is symbolic of Jesus’ body being broken for us, and the wine of his blood being shed for us. As it says in Isaiah 53: 5: “he was wounded for our transgressions, crushed for our iniquities; upon him was the punishment that made us whole, and by his bruises we are healed.”

Good Friday
This is the day Jesus was crucified. So why is it called “good”?

Some traditions refer to Good Friday as “Black Friday.” This is done to emphasize the serious and sacrificial nature of what happened on the cross. I also wonder if it has to do with the fact that “darkness came over the whole land” at noon on the day of the crucifixion (see Mark 15:33).

This is also the day you’ll sometimes see people having cross parades through the streets.

Crucifixion
This was an ancient way of executing political criminals. Many crucifixions happened and they were ruthless, not only for their physical pain (and torture during and sometimes before), but because they were public mocking and shaming rituals.

Most commonly, nails were used to fix the body to the cross. Despite popular depictions in art, the feet of the crucified person were probably not stretched all the way down, but rather fixed higher on the beam so that the knees were bent. After a while, because of the weight of the torso, the arms would dislocate, causing the lungs to fill with blood. The individual then starts to down. If they need air, they have to stand up, supporting their own weight on their ankles which are fixed to the cross with nails. Birds and prey lurk while crowds watch.

Related article: Did Jesus Really Exist? – My response to the strange claims of Maclean’s magazine

Resurrection & Easter
Resurrection is quite miraculously Jesus being raised from the dead on Sunday morning. This is God’s statement of Jesus’ innocence, and his climactic victory over the powers of Satan, sin, death and darkness. And Easter Sunday is the day it happened!

For Christians, Easter is the main event. If there’s no Easter, there’s no Christianity. It makes me think of a book I read in high school, A Prayer for Owen Meany by John Irving. Speaking about how the cross and Easter outweigh the significance of Christmas, Owen says, “Anyone can be sentimental about the Nativity; any fool can feel like a Christian at Christmas. But Easter is the main event; if you don’t believe in the resurrection, you’re not a believer.”

But what about the name itself?
Today, the name “Easter” refers to this celebration of Jesus’ resurrection. But the origins of the word itself are hard to track down. Some speculate it was originally connected to a spring goddess called Oestre (but was then taken over for other reasons), or that it was based on a word for “east” (i.e. the sun rises in the east) or even an older word for resurrection.

Either way, it’s meaning is now firmly connected to the modern Christian celebration of Jesus’ resurrection.

I also sometimes get asked why the date for Easter changes every year. That’s because it’s determined by the Paschal Full Moon (which falls somewhere between March 21 and April 25).

Here’s a final thought about the meaning of Easter. In sports, the “game-winning goal” is the goal that puts the winning team ahead for good. At the time it’s scored, you don’t really know it’s the game-winning goal. Battles are still being fought and the final buzzer hasn’t gone. But when you look back after the fact, you realize it was the goal that guaranteed victory.

That’s like Easter. Easter is the game-winning goal in the middle of the game. It’s when God made the decisive and victorious move for his people and for his world on the cross. Through his love and sacrifice, victory was won over all evil powers, and a new world order was set in motion. And even though battles are still being fought, and even though life is still being lived, it was the moment in history when everything changed and victory was guaranteed.

So, back to where we started. What does “benedictus qui venit” mean?  It means “blessed is he who comes”!

In light of that, may your Holy Week have purpose, goodness and victory. (And a little less confusion.)