Remember the Flanders family from The Simpson’s TV show? They were Homer and Marge’s quirky, religious next door neighbours.

Ned had those prim-and-proper sweater sets, and the kids had more Bible knowledge than many of the modern-day religion professors in North America.

They always seemed to be concerned about everyone’s soul, peppered their conversations with gospel-y jingles (“God told Noah to build him an arky, arky!”) and padded their vocabulary with bizarre expressions like “Okilly-dokilly, neighbor!” 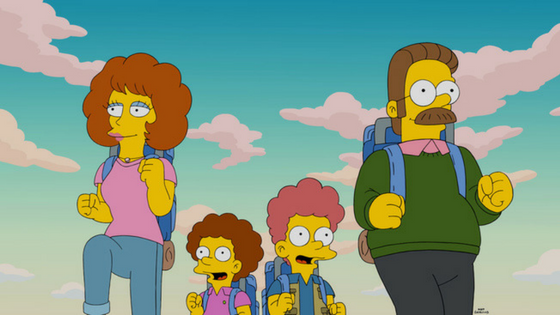 Word on the street is that they had a satellite for their TV, but blocked 230 channels. The only one they had left was for children’s Christian programming.

In many ways, they’re a caricature of a family with fairly conservative religious ideals, trying to live out their personal and social morality in a changing culture.

But recently it occurred to me that to some people… my family might seem like the Flanders!

As many of you know, I’m a pastor. I’ve led a church for 9 years. I’m married to the best human to ever walk the planet (other than Jesus, and maybe Moses), and have three active, smart kids.

We are definitely religious/spiritual/Jesus people.

My first hint of this different-ness came when my wife and I discovered that, for several years, a group of people in our lives referred to us as “Team God”—as in, “Here comes Team God!”

At first I thought it was a bit strange. “Wait a second,” I thought, “we don’t stand out that much, do we?”

Sure, we pray, read the Bible, and go to church on Sundays. And yes, although very flawed, we try to live by a distinct ethical code that is increasingly at odds with our society.

But we’re not as bizarre as the okilly-dokilly Flanders.

The more I thought about it, the more I realized it might actually be true. Get this.

We’ve been known to have Vacation Bible Camp songs cranked in the car… even when the kids aren’t with us.

In our house, “frick” is considered a swear word.

And we don’t have cable or Netflix.

I’m not really a sweater guy, and I’m not the biblical literalist that Ned is, but maybe we are the Flanders!

But the more I thought about it the more I wondered, is that really so bad? Consider this: 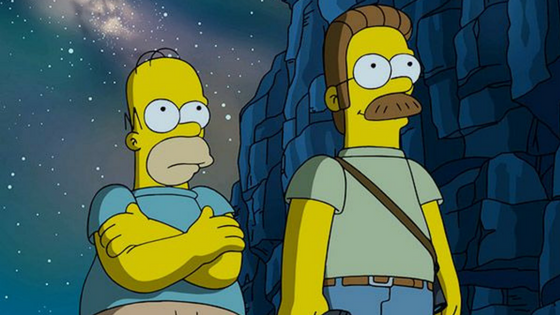 1. The Flanders are hard-working. The kids do their best, the mother runs an incredible home, and, among other things, Ned works his bottom off at the Leftorium—a store devoted to making gadgets for left-handed people.

2. They are really involved in their community. They volunteer to help the poor, and do their best to be charitable even when other people treat them poorly in the process. (Also, Ned is a volunteer fire fighter.)

3. They are very flawed. In the course of trying to honour God, they frequently mess up. I like that because it makes them seem more real. One of the more obvious moral blunders was when Ned and Homer went to Vegas, and in a haze of party-fog, Ned got married to someone… even though he was already married to someone else!

4. For all their spiritual flamboyance, they are sincere in their faith. The more I watch the Flanders, the more I admire them. They mean it. They try to walk the talk, even if they are a bit kooky-bananas.

5. And finally, they don’t really care that much about being different.

And as an added benefit, their family is incredibly close-knit.

I like to think that our family is also hard-working. I also like to think we are committed to serving and improving our community.

And we are definitely flawed—100%. Even though I’m pretty sure I won’t marry another woman while in Vegas, every single day reminds me about my own limitations, priority problems, pride and prejudice.

Mostly, I hope we’re also sincere in our beliefs. In our own small corner of Springfield—um, I mean, Barrie—a life following Jesus challenges us every day and is a source of purpose, difficulty, and joy. Our hope is that we can live this life as consistently as possible.

And as time goes on, we don’t really care that much about being different either.

The comfort zone is crowded… and boring.

One of the inaccuracies in the Simpsons—and in our culture’s negative portrayal of Christianity in general—is that a life following Christ is boring.

It’s rich, always changing, full of truth and love, and more meaningful than anything we could ever have imagined. A pulse doesn’t mean you’re alive. And what we’ve discovered is that Jesus’ words in John 10:10–that he came for us to “have life, and have it abundantly”–are actually true. The more we seek it, the more he shows it.

"A pulse doesn't mean you're alive."

To sum up, and to quote Ned Flanders, “God loves you, neighbor-eeno!” Over and out.